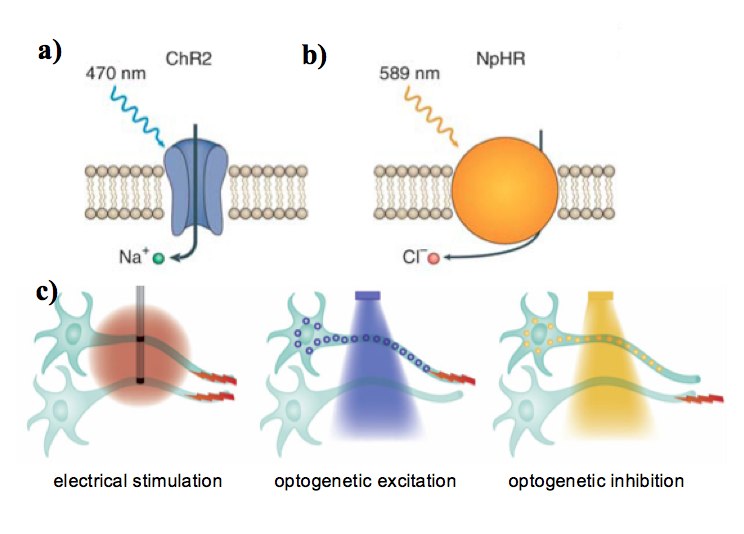 University of Chicago‘s Francisco Bezanilla has published a study detailing the use of targeted gold nanoparticles to allow light to activate neurons.  He describes it as optogenetics with out genetic manipulation.

Optogenetics has  relied on genetic modification, limiting its use to few model organisms. Bezanilla previously demonstrated that normal, non-genetically modified neurons can be activated by heat generated by IR pulses. This method lacks specificity and can damage cells. To improve the technique, he used 20-nm gold particles that, when stimulated with green light, absorb and convert light energy into heat.

Two kinds of nanoparticles were tested : ones coupled with a synthetic molecule based on Ts1,  and ones coupled with antibodies that bind to ion channels.  Nanoparticle treated neurons were readily activated by photothermal stimulation. Untreated neurons were unresponsive.  Targeted neurons could be stimulated repeatedly with out cell damage. Some individual neurons produced more than 3,000 action potentials over 30 minutes with no reduction in efficacy.

Nanoparticles were  also tested on complex brain tissue using thin slices of mouse hippocampus.  Groups of neurons  were activated and their activity patterns observed. Treated neurons could still be stimulated after being continuously washed for 30 minutes, indicating that the nanoparticles were tightly bound to the cell surface. Excess nanoparticles wash away, minimizing potentially harmful elevated temperatures.

The ability of nanoparticles to be coupled to different antibodies and retain efficacy suggests flexibility for future applications, including human therapeutic development.

This could, one day, improve the treatment of retinal diseases, such as age-related macular degeneration, where photoreceptor cells that absorb light signals are damaged or dead. The retinal nerve cells that carry visual information to the brain often remain intact and healthy. Nanoparticles targeted to these cells could potentially absorb light and directly stimulate the neurons, bypassing defective photoreceptors.

Although no harmful effects were observed, the researchers said that toxicity is possible, and are now testing the technique in animal models to further evaluate its therapeutic potential.