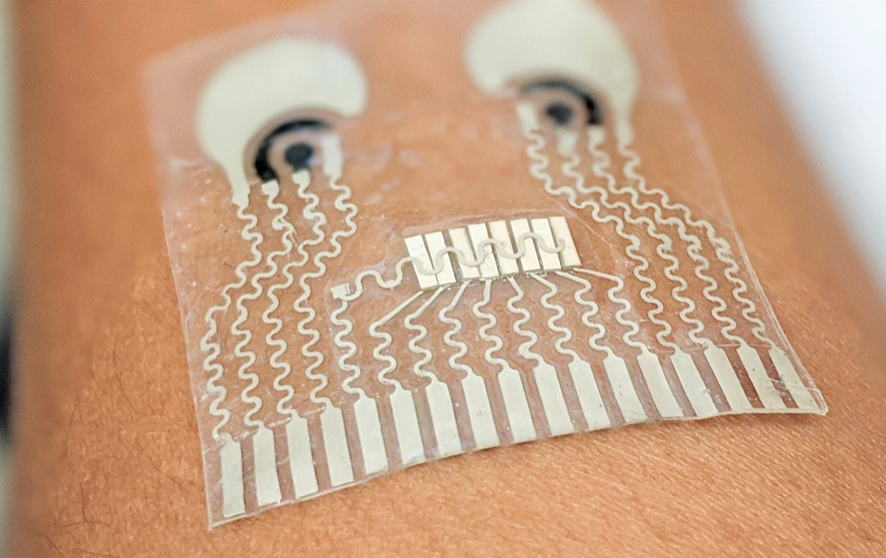 UCSD’s Joe Wang continues to define the future of vital sign monitoring with a combination of advanced chemistry and unobtrusive wearables. Together with Professor Sheng Xu, he has developed a skin patch that continuously tracks blood pressure and heart rate while measuring glucose levels, lactate, and alcohol or caffeine. It is the first wearable device that monitors cardiovascular signals and multiple biochemical levels simultaneously.

Remote monitoring is obviously increasingly important in the age of COVID. A device that can show the earliest signs of distress, including the onset of sepsis, in those at risk of becoming seriously ill during the pandemic, is significant.

The patch could also be used in hospital ICUs for patients of all ages.

According to Wang, “the novelty here is that we take completely different sensors and merge them together on a single small platform as small as a stamp. We can collect so much information with this one wearable and do so in a non-invasive way, without causing discomfort or interruptions to daily activity.”

Professo Xu described the new patch, saying “Each sensor provides a separate picture of a physical or chemical change. Integrating them all in one wearable patch allows us to stitch those different pictures together to get a more comprehensive overview of what’s going on in our bodies.”.

The chemical sensors are two electrodes that are screen printed on the patch from conductive ink. The electrode that senses lactate, caffeine and alcohol is printed on the right side of the patch; it works by releasing a drug called pilocarpine into the skin to induce sweat and detecting the chemical substances in the sweat. The other electrode, which senses glucose, is printed on the left side; it works by passing a mild electrical current through the skin to release interstitial fluid and measuring the glucose in that fluid. The researchers were interested in measuring these particular biomarkers because they impact blood pressure.

In tests, subjects wore the patch on the neck while performing various combinations of the following tasks: exercising on a stationary bicycle; eating a high-sugar meal; drinking an alcoholic beverage; and drinking a caffeinated beverage. Measurements from the patch closely matched those collected by commercial monitoring devices such as a blood pressure cuff, blood lactate meter, glucometer and breathalyzer. Measurements of the wearers’ caffeine levels were verified with measurements of sweat samples in the lab spiked with caffeine.

One of the biggest challenges in making the patch was eliminating interference between the sensors’ signals. To do this, the researchers had to figure out the optimal spacing between the blood pressure sensor and the chemical sensors. They found that one centimeter of spacing did the trick while keeping the device as small as possible.

The researchers also had to figure out how to physically shield the chemical sensors from the blood pressure sensor. The latter normally comes equipped with a liquid ultrasound gel in order to produce clear readings. But the chemical sensors are also equipped with their own hydrogels, and the problem is that if any liquid gel from the blood pressure sensor flows out and makes contact with the other gels, it will cause interference between the sensors. So instead, the researchers used a solid ultrasound gel, which they found works as well as the liquid version but without the leakage.