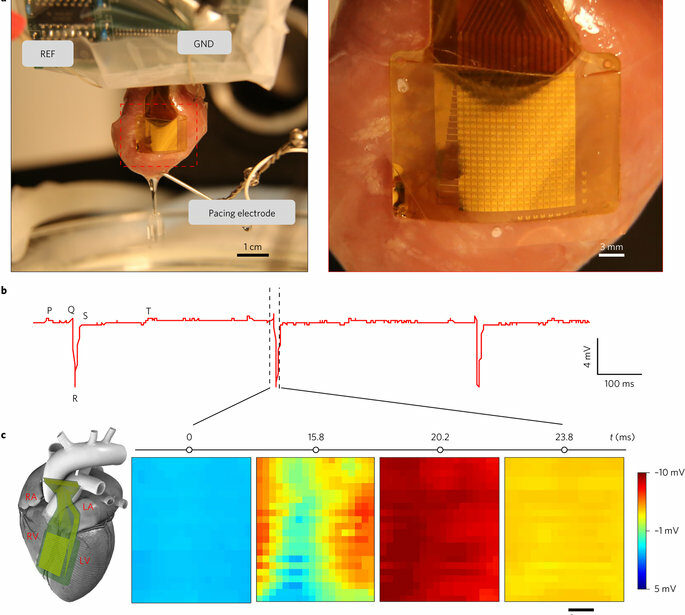 Northwestern’s John Rogers has developed a sensor that can monitor electrical activity irregularities in the heart for 70 years.  The sensor is much safer and more refined than current technology, which degrades easily, and can harm patients.

An array of 396 voltage sensors are set in a very thin, multi-layer, flexible substrate,  meant to attach to the outside of the heart, covering a significant portion of the organ. Previous sensors arrays picked up signals through direct contact between a metal conductor and human tissue. The new array is covered with an insulating layer of impermeable silicon dioxide. This is a dramatic improvement on metal conductors, which corrode and allow biological fluids to leak through, which can lead to a short circuit and, potentially, ventricular fibrillation and cardiovascular collapse.  Previous attempts at  the adding an  insulating layer have been too thick for the signal to be recorded effectively.

According to Rogers: “You want this layer to be as thin as possible to enable a strong electrical coupling to the surrounding tissue, but you need it to be thick enough to serve as a robust barrier to water penetration.”  He seems to have achieved just this.

Rogers believes that with a larger surface area and more nodes, the sensors could one day cover most of the body’s organs . He will test whether they can both collect data and deliver energy to an organ, such as a pacemaker, or be able to study the underlying function of the brain.