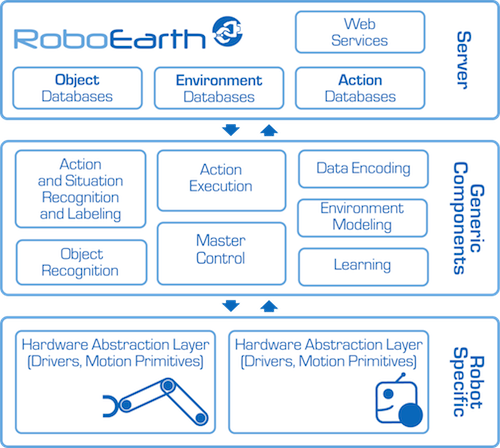 RoboEarth’s goal is to speed the development of human-serving robots. Scientists from five European universities gathered this week for its launch and demonstrated potential applications. This included a robot scanning a room’s physical layout, including the location of the patient’s bed, and the placing a carton of milk on a nearby table.

The system is sometimes called a “Wikipedia” for robots, allowing them, or their programmers,  to share and retrieve information.

Researchers claim that the robots’ technically sophisticated capabilities are comparable to those of high-end robots in car factories. They, however,  look clumsier because robots that interact with humans are not performing repetitive tasks in the controlled, sanitized and predictable surroundings of a factory.

RoboEarth’s system of networked computers enable it to perform intensive computing tasks that smaller computers (or simpler robots) cannot.  It also allows individual robots to communicate between themselves through its “RoboCloud” and robot database. This could facilitate light and cheap robots that use the cloud for computing.