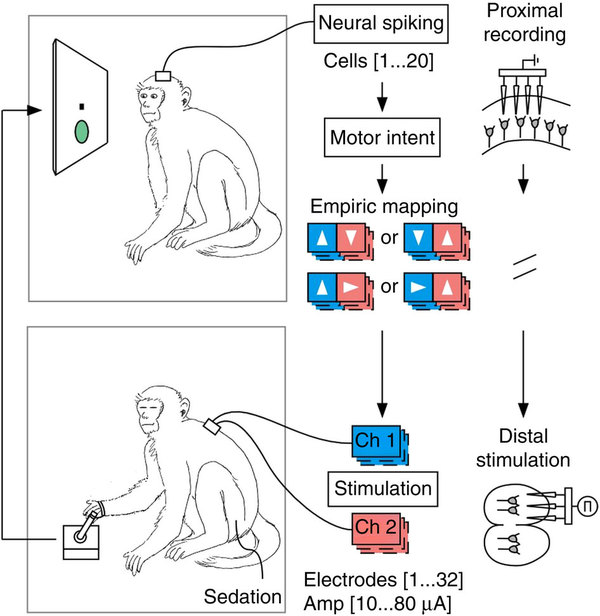 Cornell‘s Maryam Shanechi, Harvard‘s Ziv Williams and colleagues developed a cortical-spinal prosthesis that directs “targeted movement” in paralyzed limbs. They tested a prosthesis that connects two subjects by enabling one subject to send its recorded neural activity to control limb movements in a different subject that is temporarily sedated.

The BMI is based on a set of real-time decoding algorithms that process neural signals by predicting their targeted movements. In the experiment, one animal acted as the controller of the movement or the “master,” then “decided” which target location to move to, and generated the neural activity that was decoded into this intended movement. The decoded movement was used to directly control the limb of the other animal by electrically stimulating its spinal cord.

The researchers focused on decoding the target endpoint of the movement as opposed to its detailed kinematics. This allowed them to match the decoded target with a set of spinal stimulation parameters that generated limb movement toward that target. They demonstrated that the alert animal could produce two-dimensional movement in the sedated animal’s limb .

The experiment focused on two different animals, rather than just one with a temporarily paralyzed limb. The scientists contend that this provided a true model of paralysis, since the master animal’s brain and the sedated animal’s limb had no physiological connection, as is the case for a paralyzed patient.