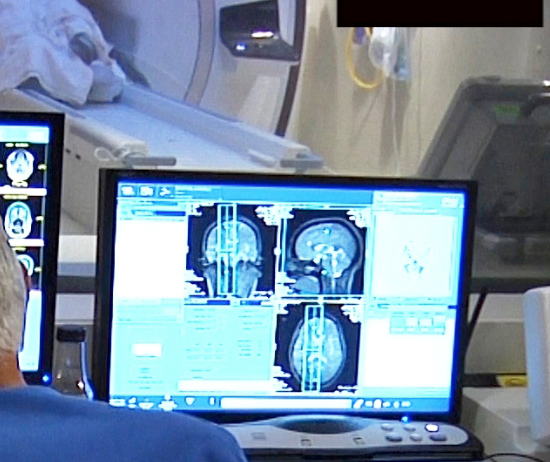 UVA’s Scott Sperling and Jeff Elias, who already used focused ultrasound to treat essential tremor, have just published the results of  a small study showing the efficacy of the technology in Parkinson’s Disease.

The sound waves were shown to interrupt brain circuits responsible for the uncontrollable shaking associated with the disease. The researchers claim that their study also offers “comprehensive evidence of safety” in its effect on mood, behavior and cognitive ability, which has not previously been studied.

According to Sperling, “In this study, we extended these initial results and showed that focused ultrasound thalamotomy is not only safe from a cognitive and mood perspective, but that patients who underwent surgery realized significant and sustained benefits in terms of functional disability and overall quality of life.”

27 adults with severe Parkinson’s tremor that had not responded to previous treatment were divided  into two groups. Twenty received the procedure, and a control group of seven (who were later offered the procedure) did not. Participants reported improved quality of life, including their ability to perform simple daily tasks, emotional wellbeing, and a lessened sense of stigma due to their tremor, at both three and twelve months.

The team found that mood and cognition, and the ability to go about daily life, ultimately had more effect on participants’ assessment of their overall quality of life than did remor severity or the amount of tremor improvement.

Cognitive decline was seen in some participants after the study, in that they were less able to name colors and think of and speak words. The cause of this was unclear, and must be investigated. The researchers suggested this could be a result of the natural progression of Parkinson’s.