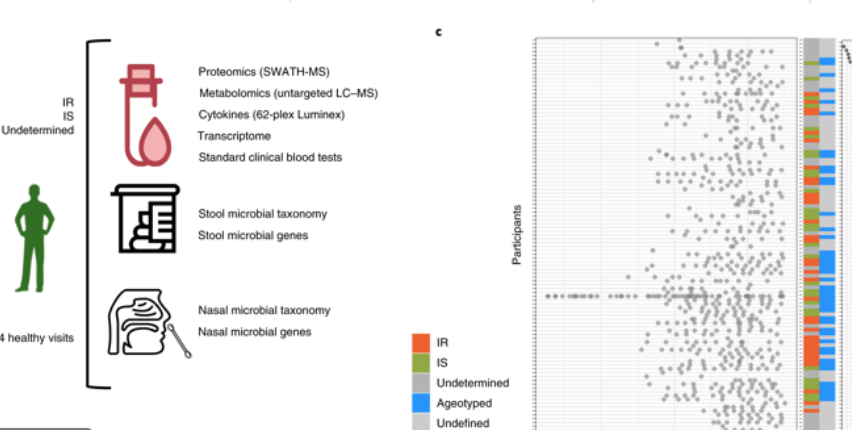 43 healthy men and women between the ages of 34 and 68 were profiled, with extensive measurements of certain microbes and biological molecules, such as proteins, metabolites and lipids, taken at least five times over two years.

Snyder said that the study enabled the researchers to see clear patterns of how individuals experience aging on a molecular level and help them focus on health-risk factors and find the areas in which they’re most likely to encounter problems in the future.

For example, those who are metabolic agers might be at a higher risk for diabetes or show signs of elevated hemoglobin A1c as they grow older. Immune agers might generate higher levels of inflammatory markers or be more prone to immune-related diseases as they age. The ageotypes are not mutually exclusive. They signify the pathways in which increases in aging biomarkers are most pronounced

Differences in aging between healthy and insulin resistant participants were studied for the first time. Snyder discovered 10 molecules that significantly differed between insulin-sensitive and insulin-resistant people as they age. Many of those markers were involved in immune function and inflammation.

In some people, their markers decreased, at least for a short period, when they changed their behavior. The overall rate at which they aged declined, and in some cases aging markers decreased. This occured in molecules including hemoglobin A1c and creatine, a marker for kidney function, among a small subset of participants.

In that subset, Snyder said, there were individuals who made lifestyle changes to slow their aging rate. Among those who exhibited decreased levels of hemoglobin A1c, many had lost weight, and one made dietary changes. Some who saw a decrease in creatine, indicating improved kidney function, were taking statins. In other cases, exactly why rates of aging markers waned was unclear. For some people, there were no obvious behavioral changes, yet the team still saw a decreased rate of aging along their ageotype pathways. There was also a handful of people that maintained a slower-than-average aging rate throughout the entire study.

Prof Snyder was a speaker at the 2019 ApplySci conference at Stanford.